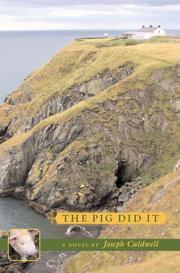 THE PIG DID IT

Caldwell’s latest novel (Bread for the Baker’s Child, 2001, etc.) is a fizzy West Ireland farce featuring a lovelorn American, a pig and a handyman’s skeleton—the first book in a projected “Pig trilogy.”

Aaron McCloud has come to Ireland to wallow in a romantic disappointment. On his way to the house occupied by an aunt who’s a successful writer (she shamelessly raids and revamps literary classics), he encounters a pig on the side of a road. Before he can devote himself to a lonely routine of mooning lamentation, the pig adopts him and refuses to leave. The pig subsequently escapes the aunt's shed, roots up her vegetable patch and unearths a shallow grave containing the remains of Declan Tovey, his aunt’s lover. The opening is glib and languid, but those bones—exhumed, disarticulated, rearranged, laid in state, cleaned, wrapped, waked over, hidden in a secret passage, and so forth—jolt the book to life. The middle section is a lively, irresistible farce. To Aaron’s dismay, Aunt Kitty and her equally feisty friend/rival, Lolly, refuse to allow police meddling. And there’s poor suffering Sweeney, a man obliged to carry on a bitter family feud with the McClouds at the same time he carries a terrible torch for Kitty—whom he thinks the guilty party. Kitty suspects Lolly; Lolly points the finger at Sweeney. Aaron lurches from theory to theory.

A preposterous ending squanders some readerly goodwill, but this is—in its loose-limbed, playful, gab-o’-the-Irish way—mostly a pleasure.