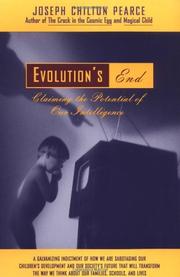 EVOLUTION'S END: Claiming the Potential of Our Intelligence

Neo-Luddite/New Age pop apocalypticism from the author of Magical Child Matures (1985), The Bond of Power (1981), etc. There's precious little here that hasn't cropped up in Pearce's other books, reshuffled but adding up to the same old message: that we make the world that we inhabit (""our world is a construction of knowledge and each act of knowledge brings forth a world""), and that modern living is mucking it up. Human intelligence, says Pearce, consists of ""fields of potential"" ready to he awakened by the right ""model environment."" Pearce looks at how this process unfolds in thinking, dreaming, sight, hearing, memory, and the like, finding support for his ideas in various New Age dogmas, as well as in the religious teachings of Castaneda and Muktananda. What emerges is a cogent if scientifically dicey sketch of the ""self-organization"" of perception. Upon this platform, Peace constructs a novel three-stage model of human development: heart-mind synchrony, which occurs in infancy; postadolescent synchrony of the physical self and the creative process, which few of us attain; and a final mystical sage, nearly unknown, that ""moves us beyond biology."" Why do so few people reach the top of the ladder? Because our potential is poisoned by ""barbaric"" practices like circumcision and premature snipping of the umbilical cord. Pearce saves his worst news for blacks, a ""high percentage"" of whom are ""uneducable"" because of the ""psychic shock"" of not using midwives! As for children who squeak through infancy, they face such horrors as day care, TV, toy stores, and Little League, which ""prevent neural development"" or at least warp creativity. A singular theory of human development, placed on an attractive epistemological berne and then eroded by technophobia, hyperbole (in proper birthing, ""our civilization, as well as our species, is at stake""), and hints of racism, until what remains seems curiously deformed--a jeremiad without common sense.