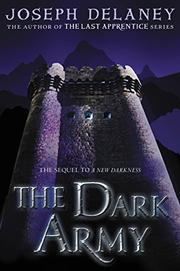 From the A New Darkness series, volume 2

Tom Ward, the Chipenden Spook, is back from the dead and ready to fight against the monstrous wolflike Kobalos horde, with his apprentice, Jenny Calder, and the witch assassin Grimalkin by his side.

The two white humans and the shape-shifting lamia do their best to prepare to fight evil, but old friends and foes enter the picture and complicate things. By the story’s end not much has changed for our heroes, but the author does a good job driving in circles and making readers feel like they’re seeing new scenery. Delaney’s usual blunt expository dialogue and clumsy narrative drive are on full display here, but so are his worldbuilding and mood-setting. Tom’s world, a boilerplate alternative medieval Europe, is filled with fog and moonlight and creepy creatures lurking behind every tree. Tom and Jenny don’t get much to do other than cope with bloody terror, but Delaney knows how to build a horrifying set piece. The adventure is no better built than the last, continually ambling toward a massive showdown with the enemy but never getting there, however a late reveal of an old foe provides just enough spark to make the book worth fans’ time. Here’s hoping the next installment will finally give readers a payoff to all this buildup.

Skippable for newbies, but fans will salvage enough to make it worthwhile even as they hope for payoff next time.