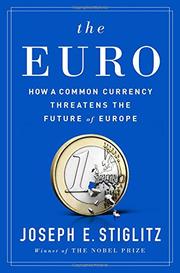 How a Common Currency Threatens the Future of Europe

A tale of monetary union and its discontents.

Nobel Prize winner Stiglitz (Economics/Columbia Univ.; Rewriting the Rules of the American Economy: An Agenda for Growth and Shared Prosperity, 2015, etc.), long a nuanced critic of globalization, turns his attention to the doomed project that is the single European currency, the euro. Doomed, that is, because it presupposes an economic integration into a single economic community that has not been matched by the necessary political integration. The eurozone may be a single entity in theory, but in reality, it harbors competing national interests. Furthermore, any government requires the ability to develop and enforce its own regulations, a cause for conflict within any overarching union. Stiglitz sees within the push for the single currency the same neoliberal motivations as for globalization, a related process, and those, not surprisingly, involve making the rich richer at the expense of the poor. In the case of Europe, the byword for the poor is Greece, the nation that has perhaps suffered most in the cause of economic integration, where wage and pension decreases have had catastrophic effects, including a general devaluation of the economy. “Internal devaluation increases economic fragility by bringing more households and firms to the brink of bankruptcy,” he writes. “Inevitably, they cut back on spending on everything.” Lack of spending in a consumer economy yields disaster, and in the case of Greece, “the best evidence is that a country that goes through a deep downturn never bounces back to make up for what is lost. What is lost is lost forever.” Short of dissolving an economic union that he regards as ill-advised, Stiglitz examines possible palliatives, including allowance for more economic flexibility within the EU, with different areas trading at different values. That economic union can and should be saved, he writes, but only if it truly means the creation of “the shared prosperity and solidarity that was part of the promise of the euro.”

A cogent and urgent argument of compelling interest to economists and policymakers.