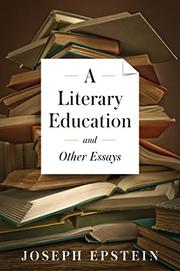 A LITERARY EDUCATION AND OTHER ESSAYS

A curmudgeonly cultural critic collects a potpourri of his pieces from the past 30 years, most from Commentary and the Weekly Standard.

Prolific essayist, biographer and novelist Epstein (Essays in Biography, 2012, etc.) never leaves readers wondering about much. He delivers fierce punches to the guts of all sorts here: writers he doesn’t care for (Updike, Mailer, Morrison, Vidal, Roth, Rich—both Frank and Adrienne), practices he abhors in higher education (the death of the liberal arts, emphases on feminism and Marxism and various other -isms in the literature curriculum), publications he doesn’t like (the New York Review of Books, the New Yorker, the New York Times Book Review), child-rearing practices he disdains (contained in a wild essay called “The Kindergarchy: Every Child a Dauphin”), poetry he doesn’t like and sentences he hates. Such a collection inevitably leads to some repetition, so readers hear a few times about his college days (the University of Illinois, his transfer to the University of Chicago), his early days of being a liberal, his peacetime service in the military and his conversion to conservatism—a transformation occasioned in major part by the excesses of the 1960s and ’70s. Epstein does not often communicate any sense of uncertainty; he dispenses opinions and decisions with all the conviction of a judge on an afternoon TV show. Things are so, he seems to say, because I declare them so. Still, his pieces inevitably entertain as well as educate—and/or annoy). He eviscerates Paul Goodman, some colleagues at Northwestern University (where he taught for decades), Maya Angelou and Spike Lee, and he declares that Dreiser and Cather surpass any subsequent American novelists. He also blasts the National Endowment for the Arts (he served the agency for a bit).