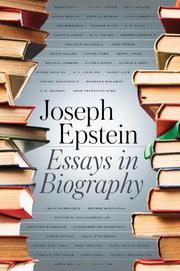 The acclaimed essayist and former editor of the American Scholar presents a provocative collection of essays that illustrate the ways a writer can employ biographical detail.

Epstein (English/Northwestern Univ.; Gossip, 2011, etc.) has assembled a motley crew of characters—from Henry Adams to Xenophon, Michael Jordan to Gore Vidal. The author has a capacious mind, a wide range of interests, political biases (he labels himself a conservative) and a vast storehouse of knowledge about literary history—all of which animate and inform his pieces. (A complaint: There is neither preface nor foreword—no evidence, other than internal, of the date and audience for the pieces.) Epstein begins with a tribute to George Washington, concluding that it was his “moral character” that set him apart—a trait apparently unsullied by his slave-holding? There is little doubt about the author’s conservative preferences; when he writes about literature, he can become downright nasty and laugh-out-loud entertaining. He bites Saul Bellow (“a literary Bluebeard”) substantially in a full essay then returns in other pieces for additional nips. He blasts Arnold Rampersad’s biography of Ralph Ellison, admires Bernard Malamud, eviscerates Dwight Macdonald and sucker punches both Mailer (calling “The White Negro” a “wretched essay”) and Vidal, whose essays he calls “dull hamburger.” His assessments of critics Irving Howe, Alfred Kazin and Irving Kristol range from measured to admiring. Epstein reserves some of his most potent firepower for Susan Sontag (her films, he writes, are surely playing in hell) but loves the work of Max Beerbohm and George Eliot. Writing of the latter, he notes how she had a sympathy for Jews that is lacking in many other major writers. He ends with a moving account of his friendship with a man in a nursing home.

Articulate, funny, informed and bitchy—guaranteed to both delight and disconcert.