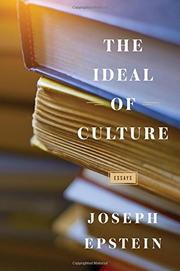 THE IDEAL OF CULTURE

The former editor of the American Scholar, Epstein (Emeritus, English/Northwestern Univ.; Wind Sprints: Shorter Essays, 2016, etc.) gathers recent essays, most published in Commentary, the Weekly Standard, and the Wall Street Journal. Having turned 80 in 2017, Epstein takes pride in being “out of it,” oblivious to popular culture, contemporary novels, art, and politics. As a younger man, he describes himself as having been a “strong liberal, leaning to the radical in politics,” but the social and political upheaval of the 1960s changed those views profoundly. As a teacher at Northwestern, he saw intellectual authority questioned and sullied. In several essays he laments “the death of traditional liberalism” as represented by Hubert Humphrey and Lionel Trilling and the rise of “dogmatic academic feminism, victimological African-American Studies,” and the widespread prevalence of “victim studies.” As a result, there “has been the emphasis on race, class, and gender and the concomitant politicalization—some would add trivialization—of much that goes on in the humanities and social sciences departments.” Victimhood is not limited to academia, according to Epstein, but pervades literature (memoir and the fiction of Toni Morrison, “a connoisseur of victimhood whose novels deal with little else”) and politics. Politicians like Hillary Clinton and Barack Obama, writes the author, are not evaluated “on their intrinsic qualities” but “because of the accidents of their birth; because they are black, or women, or, one day doubtless, gay, or disabled.” Epstein waxes nostalgic for the serene gentility of WASP culture. Gone are the days, he writes, when “stability, solidity, gravity, a certain weight and aura of seriousness suffused public life.” Although “in our egalitarian age,” cultural elitism is damned, Epstein happily champions “the best that has been thought and said.” In an essay on wit, the author modestly admits that he is not witty but “mildly charming.”