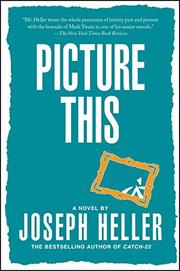 You could say, being charitable, that Heller has now firmly moved his work in a new direction: postmodernist, syncretic, contrapuntal. You could as well say, not being charitable, that his new book is the worst kind of disingenuous botch, a sad comedown indeed from the author of Catch 22 and Something Happened: an imagination-less, inflated, one-dimensional, and oh-so-cheap routine of historical juxtaposition and smart-alecky asides. The premise is spun from Rembrandt's painting (now in the Metropolitan of New York) of Aristotle Contemplating the Bust of Homer. This leads Heller into a series of cut-aways to ancient Greece, to 17th-century Amsterdam, and to contemporary New York—a wearying clutch of historical facts all given the gloss of Ripley-ish can-you-believe-it? coincidence and astoundingly naive liberal consternation. There is no story here—do not search—only a run of ping-ponging piths, the fruits of Heller's historical readings. That Rembrandt was a money-eager, poor-bastard genius; that Plato was a facist; that lovely Aristotle must be writhing in his ethics to be up there on the Met's walls, all $2,300,000 worth of him; that Greek history shows remarkable parallels to recent American stupidities and casual barbarities (I.F. Stone territory). You keep waiting for Heller, as he did in God Knows, at least to stuff some jokes into the mouths of the dead—but he's too busy with the jaundiced set of this painting of himself ("Rembrandt would not afford a Rembrandt") to bother actually to novelize a little. Charity would venture that Heller might be walking in the steps of someone like Guy Davenport (who pulls off this kind of history-pastiche with grace and tang and never such painful earnestness—or such length). The uncharitable would say that Heller, with this novel-length screed against wealth, has produced instead a swollen between-boards equivalent of a Paul Harvey broadcast. Just terrible—and even a little boorish.