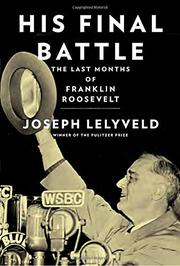 The Last Months of Franklin Roosevelt

Was FDR’s decision to run for an unprecedented fourth term while in a state of such disastrous health foolhardy or inevitable? In this meticulous psychological study delineating FDR’s crucial final acts as president—e.g., meeting Joseph Stalin for the first time in Tehran in November 1943, articulating the Four Freedoms, framing the United Nations, advocating for a democratic government in Poland, and winning the war—former New York Times executive editor and Pulitzer Prize–winning author Lelyveld (Great Soul: Mahatma Gandhi and His Struggle with India, 2011, etc.) portrays a melancholy, ailing president contemplating a fourth term as if “cornered” and resigned to seeing no alternative. The author asserts that FDR allowed himself to dream of resigning in his fourth term, yet there was simply too much at stake: the country would not let him go. The weight of the stress, however, was literally killing him, and despite the “roseate prognoses and testimonials” by his longtime physician, Ross McIntire, Lelyveld asserts that FDR “knew more than he let on” about the state of his heart, citing confidante Daisy Suckley’s frank acknowledgements in her long-hidden diary. The truth would be confirmed by Navy cardiologist Howard G. Bruenn, who was finally summoned by FDR’s worried daughter, Anna, in 1944. The author expertly puts together a string of poignant clues to FDR’s last acts, as if he were acknowledging the need for a proper successor in choosing Harry Truman for a running mate, thereby jettisoning the problematic Henry Wallace, and contemplating his own mortality by seeking out his former flame, Lucy Mercer Rutherfurd, in several tender elegiac meetings, particularly his last dying day. In the end, Roosevelt was pondering the example of his hero, Woodrow Wilson.

An elegant, affecting work that offers fresh insights on a much-mythologized president.