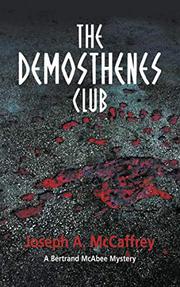 In this 11th installment of a mystery series, a private eye looks into a possible murder that may be linked to a drowning from nearly a half century ago.

Psychiatrist Dr. Linda Rhine is convinced her patient and friend Cynthia Power did not commit suicide. As cops refuse to investigate Cynthia’s death as a homicide, Rhine seeks help from another patient, Augusta Satin, an ex-detective who works with Davenport, Iowa, private investigator Bertrand McAbee. Cynthia had belonged to the Demosthenes Club in high school back in the 1960s. She’d recently been writing a book on the club, as its members have gone on to high-profile careers. But it seems one inebriated member, Illinois Congressman Corey Bladel, let slip something regarding Anne Podreski, the club member who died in a drowning accident before the group’s high school graduation. Certainly Francine Korbel, the retired chief economist for an agribusiness company, feared what Bladel had relayed to Cynthia. But was it enough for her or someone else to murder Cynthia? McAbee interviews club members and also delves into the dead woman’s past; in 1995, while Cynthia was living in Sarajevo, an unidentified shooter killed her lover, Toma Korpanja. Someone in the present day is apparently nervous and targets McAbee and his associates, including hacker Barry Fisk and former covert government man Jack Scholz. As in the preceding installment, McCaffrey’s (A Went Over Case, 2016, etc.) story boasts an unhurried pace. McAbee and his cohorts often walk away from interviews with no revelations or new pieces of evidence, generating a slow-burning mystery. Nevertheless, the author’s characters are striking, particularly suspects like Korbel, who’s rather shady without readers even knowing whether or not she’s a killer. Similarly, the good guys are sharp and flawed; McAbee’s secretary, Pat Trump, hates Fisk so much she threatens to quit, and the conflicted PI occasionally benefits from Scholz’s “violent tactics.” The final act ignites the narrative’s momentum with a solid plot turn and a satisfying wrap-up, in terms of both the murder and McAbee’s team.

MORE BY JOSEPH A. MCCAFFREY

A Went Over Case
by Joseph A. McCaffrey
Indie

THE MARKSMAN'S CASE
by Joseph A. McCaffrey
Indie