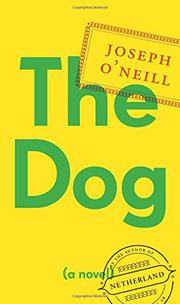 Lost love impels a New York lawyer to try to change his life with a job overseas in this circuitous, unsettling novel.

O’Neill (Netherland, 2008, etc.) returns to his previous novel’s theme of displacement as he depicts a man, known only as X., doing legal work in Dubai for a wealthy Lebanese family. He gradually reveals how he and his lover, lawyers in the same Manhattan firm, grew distant and then broke up over the question of starting a family. In the emirate, he shuffles paper, visits prostitutes, has pedicures and provides an informal travelogue on the nouveau riche of his new realm. He ponders the disappearance of another expatriate in Dubai named Ted Wilson, a scuba diver nicknamed the Man from Atlantis after a 1970s TV show about the lone survivor of that mythical civilization. X. learns of bidoons, stateless persons common throughout the Persian Gulf. He hears of an Iranian who runs into visa problems after going through passport control at the Dubai airport and decides to live in its duty-free area. X. himself was born in Switzerland and raised in the U.S. He mulls enlisting in the French Foreign Legion. While the variations of displacement resonate engagingly, the reader must navigate a patchwork of prose styles, from slang to 200-word sentences to syllogistic gobbledygook to deadly legalese. It’s as if the narrator is seeking a viable language to communicate from his “inner Robinson,” as in Crusoe, “and the inward island on which he must be marooned.” O’Neill gets some much-needed comic effects from the linguistic jigsaw puzzle, although he’s also capable of outright funny moments—a scene on a yacht includes confirmation that “gratuitous domestic nudity is prevalent among the rich and famous.”

Shades of Kafka and Conrad permeate O’Neill’s thoughtful modern fable of exile, a sad story that comments darkly on the human condition and refuses bravely to trade on the success of Netherland.