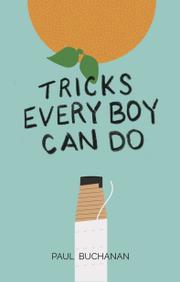 Tricks Every Boy Can Do

A love triangle involving two brothers and a neighbor girl plays out during the Great Depression and the World War II era in Buchanan’s debut historical novel.

Rose is the single mother of Alvie and Frankie—the two remaining children from a set of triplets. She scandalized her family with her pregnancy and now supports her sons by packing oranges near their California home. Frankie is a troublemaker, and Rose often has to leave work due to difficulties that he creates at school. Alvie, by contrast, is withdrawn and shy; he suspects that his sister, the third triplet who died at childbirth, haunts their home and ages along with the boys. Although the brothers are identical, the way they carry themselves makes it easy for others to detect who they are. Buchanan follows the family from 1932 to 1955, from the boys’ childhood to their adulthood. He often skips several years between chapters and allows readers to see the two siblings in states of disagreement—playing tricks on each other or getting into a physical fight. When Frankie returns from war, his brother is about to become engaged to the neighbor, Lydia, an intelligent, attractive young woman. Later, after life at home turns sour, Frankie heads north and finds work as a bartender at a place called Fat Sadie’s in Northern California. Meanwhile, other people believe that his life is as improvised as the jazz music he loves. Buchanan pays intense attention to historical detail in this novel. He carefully paces the story to coincide with real-life events, such as Orson Welles’ 1938 radio broadcast of The War of the Worlds and the 1947 New York Yankees-Brooklyn Dodgers World Series. However, it often feels as though he’s explaining the importance of each era to the reader. Although each scene in the book is deftly handled, the book’s overall composition, and particularly its time skips, create the sense that each chapter is isolated and somewhat incomplete. This changes, though, when the boys reach adulthood, when themes of personal growth and forgiveness become key.

A detailed story that provides hours of engaging, if somewhat predictable, family drama.