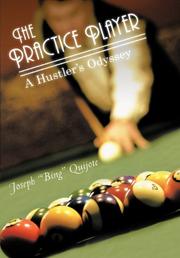 Two billiards players—one older and disabled, the other ambitious and in a slump—try to improve their game.

After some punks hustle young Henry at pool, his father teaches him everything he knows about how to work the table. Henry learns well, but his trip to Vegas turns disastrous when he bests the wrong guys and winds up with a mangled leg. More than 20 years later, he works at a poolroom and meets Jason, whose billiard skills seem to have vanished. While Jason focuses on helping a man whose son needs a $100,000 operation, Henry debates whether anyone else can play pool “in the zone.” In Quijote’s debut novel, the 21-year gap in time, near the book’s midpoint, divides two stories. The first follows Henry from age 14 to his recovery from his beating, and the second details Jason’s arrival at Maxie’s Billiard Emporium and the subsequent tourney. While the merging of the two stories works well, some of it disorients: Henry becomes a supporting character in the second half, and significant people, such as Moe, who helps the crippled man, disappear without explanation. Henry’s girlfriend, Jasmine, plays an important role in his life, but most female characters are mere objects of lust or blatant displays of vulnerability—and usually the resultant tears lead to sex. Henry’s “in-the-zone” technique gets adequate explanation, but we don’t learn why only Henry can achieve this state of being. The author hits the mark where he should; he regales with scenes of cue-stick war and saves the most impassioned bout until the end. And Quijote cleverly plots the story—some of those characters from the first half do make appearances later, and a subplot involving a woman trying to blackmail Jason leads to an uproarious late-night confrontation at a motel.

Tells two stories that sometimes compete with each other, but brilliant billiards battles make it worthwhile.