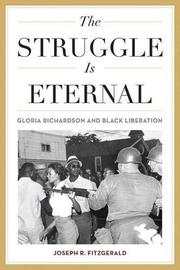 THE STRUGGLE IS ETERNAL

A detailed biography of a once-prominent civil rights activist.

In the 1960s, Gloria Richardson (b. 1922) was at the forefront of the Cambridge Nonviolent Action Committee, which targeted racial injustice in Cambridge, Maryland. Drawing on interviews with Richardson over many years, nearly 40 interviews with other activists, and a prodigious number of books and articles, Fitzgerald (History and Political Science/Cabrini Univ.) makes his literary debut with this thoroughly researched biography. Having Richardson’s cooperation proves to be both a boon and liability. She “shared her voice” as well as “many intimate details of her life and how she views the world,” but the author’s affection for her sometimes clouds the narrative. The daughter of a prominent Cambridge family, Richardson was taught “self-respect, respect for family, and respect for and service to her black community.” Undergraduate studies at Howard University grounded her in sociology, political science, and “research methods and group-management skills.” In 1962, Cambridge’s first civil rights demonstration, led by black students, included Richardson’s high school–age daughter. Soon Richardson was asked to lead the CNAC as it evolved from supporting the students to carrying out its own goals, coordinating with the Student Non-Violent Coordinating Committee, the NAACP, and the Southern Christian Leadership Conference, to focus on voting and school desegregation. Richardson, a feisty, outspoken reformer, rejected “the politics of respectability” that had characterized protest movements of the 1950s; clashes with police, arrests, and angry demonstrations were inevitable. “Threats of violence, including murder, against CNAC members and their supporters were common,” Fitzgerald reports. Media coverage elevated Richardson to the national stage. When the Kennedy administration decided to become involved in Cambridge’s racial problems, Richardson at first felt “a sense of optimism” that, unfortunately, was short-lived. A meeting with Robert Kennedy, she remarked, seemed like an empty ritual. For the next several years, Richardson was a strong and influential voice that, the author asserts, “helped Black Power percolate” and expand.

An admiring celebration of one woman’s important contribution to an ongoing struggle.