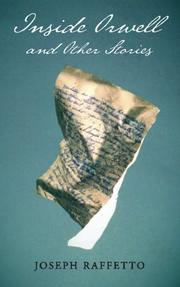 INSIDE ORWELL AND OTHER STORIES

Another selection of stories from Raffetto (The Girl from Summer and Other Stories, 2013).

This blend of fact, fiction and commentary consists of four short pieces: “Three A.M.,” “Inside Orwell,” “The Selection of ’92” and “The Georges.” The first tackles the troubled but fascinating union of Scott and Zelda Fitzgerald, sparked by the narrator’s relationship with a girl who reminded him of Zelda. The narrator contrasts Scott Fitzgerald with George Orwell, who “was not seduced by bright shiny things.” He tells of how the Fitzgeralds led a life of parties, arguments and excesses, fueled by alcohol and money woes; Zelda was drawn to writing and ballet, but mental illness prevailed, and she met a cruel end at a sanatorium in Asheville, North Carolina. The second piece concerns Orwell, a shrewd political observer, with a brief aside on the narrator’s background, and a book he published to positive reviews that failed to generate substantial sales. Raffeto writes of Orwell’s life-altering experiences in the Spanish Civil War and how he wrote Nineteen Eighty-Four on his deathbed. The first two pieces are cohesive, focused and absorbing. The book falters in the third, set in the days preceding the 1992 presidential election, with Democrat Alex and Republican Brad as competing copier salesmen. Alex’s relationship with an ex-girlfriend is intriguing, but his squabbles with Brad don’t pack the punch of the Fitzgerald or Orwell stories. The piece seems designed to favor one candidate and party over the other. The final piece is the weakest: an essay concerning Orwell and George Zimmerman, the killer of Trayvon Martin. It links Zimmerman’s attitudes with those of President George W. Bush (“liar and lunatic”) and compares Orwellian Newspeak to Fox News’ justifications of Zimmerman’s actions. It includes the author’s pointed interjections about the mishandling of the case; for example, he calls the killing of Trayvon Martin “another lynching.” The essay brims with righteous indignation and hindsight, but this diminishes its overall impact.

A mixed bag of four short pieces featuring two to savor and two to skim.