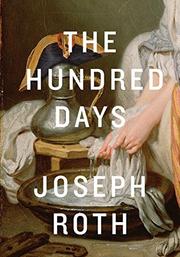 Sympathy for characters vies with purplish prose and blaring symbols in this reimagining of Napoleon’s brief resurgence after his first exile.

Roth (Joseph Roth: A Life in Letters, 2012, etc.) focuses on the period (actually 111 days) between Napoleon’s triumphant return to Paris from banishment on Elba and his defeat at Waterloo, imagining a great man moving toward his downfall. In this slim historical novel, the author dwells on the Corsican’s solitude, ambitions and shifting emotions in two sections, while two others concern a palace laundress named Angelina, also Corsican, who is infatuated with the emperor and whose aunt tells fortunes for the great man. Napoleon has an encounter with the washerwoman that leads to an almost-tryst, as well as two brushes with her son, a drummer boy in the army. The second of these, on his final battlefield, is, like many of the book’s stronger scenes, damp with bathos. Angelina briefly interrupts her adoration of the man, “so great that everything in the world was his,” to dally with the “world of sabres, spurs, boots and woven braid” in the person of “the magnificent Sergeant-Major Sosthene,” a comic giant and the drummer boy’s dad. She will also find refuge during the Elba days in the bed of a kind Polish cobbler with a wooden leg. Aside from reviewing his troops, studying his maps and visiting his mom, Napoleon does little until his coach ride to Belgium and flight to the Atlantic and his last jailers, the British. Roth dwells at length on his solitude and his consciousness of time running short. Ticking clocks and trickling sand in “an hourglass of polished beryl” are less than subtle reminders of “his enemy, Time.”

Where the classic Radetsky March could woo any reader with its breadth, insight and humor, this novel offers a sentimental miniaturist painting soppy little scenes that maybe only a Roth completist will appreciate.