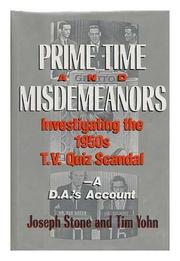 Stone, the Manhattan assistant district attorney who investigated the fixing of The $64,000 Question and other TV quiz shows, takes us step by step through his complex inquiry, finding ``lying so pervasive that it was woven into the fabric of American life.'' Writing with free-lance editor-writer Yohn, Stone, who's now in private practice, begins in August 1958, when a Dotto contestant came to his office complaining that the show had been rigged. Soon after, Herbert Stempel, a CCNY graduate forced to lose to Columbia professor Charles Van Doren on Twenty-One, claimed that the show's producer, Daniel Enright, had scripted and coached his appearances and given him answers. Ironically, the fixing of TV quiz shows was not illegal at the time, though the success of these lucrative programs depended on public perception of their ``integrity.'' The fiasco would have been limited, Stone contends, if producers like Enright had told the truth. Instead, with contracts and reputations to lose, they lied and pressured contestants—mostly ``well- educated'' citizens made famous by quiz victories—to lie, first to Stone himself, and then—despite his warnings—to a grand jury. Conflicting testimony and a billowing coverup led to congressional hearings, a second grand jury, and indictments for perjury. This story of corruption also involves lawyers, whom Stone wanted to investigate for suborning perjury, and a judge who, in Stone's view, ``danced to Enright's tune.'' What was never clarified (in part because Stone never made William Paley, Robert Sarnoff, et al., testify) was ``the nature of decision-making at the highest corporate levels that led to the proliferation of fixed quizzes.'' Although quiz-show rigging became a federal crime, the TV industry, Stone says, diluted proposed legislation for greater regulation. A through and sobering document, laying out a case of deceit and fraud before the public that was the victim. (Nineteen b&w illustrations—not seen.)