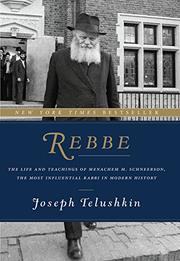 The Life and Teachings of Menachem M. Schneerson, the Most Influential Rabbi in Modern History

A biography of Rabbi Menachem Mendel Schneerson (1902-1994), whose influence on Judaism and the Jewish people is still coming into focus.

One of America’s leading rabbis, Telushkin (Hillel: If Not Now, When?, 2010, etc.) is well-qualified to write about his subject: While he is not a Lubavitcher, he has been an affectionate observer of the movement for his entire life, and his father served as Schneerson’s personal accountant. Less a traditional biography and more a compendium of mostly lighthearted anecdotes, the book progresses thematically, highlighting Schneerson’s thoughts and quips on a wide variety of subjects. Telushkin draws on Schneerson’s public statements as well as his voluminous correspondence and his thousands of private audiences, with his followers and others, both Jewish and non-Jewish, memorably held in the middle of the night. Broadly educated, Schneerson spent eight years studying engineering at prestigious universities before seeking rabbinic ordination, and each morning he read the newspapers in four languages. His far-reaching secular interests were evident in his humanistic mindset and lateral thought processes; he praised the astronauts after the moon landing, saying that he “discerned in [their] disciplined lifestyle…lessons with which Jews—particularly the sort who would not instinctively accept the demands of the Torah—could inspire themselves to be more observant.” Schneerson had no heirs (“Never spoken of in public, we can only imagine what a great tragedy and disappointment this was”), and his death was so keenly felt that his followers found the idea of appointing a successor unthinkable. Many clung to the hope that he was the Messiah, creating a deep rift in the Orthodox world. Telushkin concludes that those who believe this “do not mean what people think they mean…the Messiah issue is, in the final analysis, a non-issue.”

An approachable and admiring introduction appropriate for readers interested in modern Jewish thought.