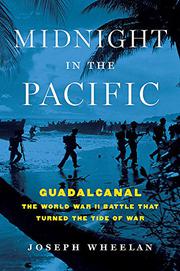 MIDNIGHT IN THE PACIFIC

A new history of the significant World War II battle in the Pacific, published to coincide with the 75th anniversary.

The battle of Guadalcanal, which lasted from August 1942 to February 1943, has produced a torrent of histories, many by the participants, but first-time readers will have no complaints about this straightforward account by journalist and historian Wheelan (Their Last Full Measure: The Final Days of the Civil War, 2015 etc.). Despite the Japanese attack on Pearl Harbor, Allied leaders agreed that fighting Hitler took priority. Only fleet commander Ernest King disagreed, and when the Japanese began building an airfield on the obscure island of Guadalcanal, his warning that this might enable Japan to sever sea lanes to Australia persuaded American military leaders to take action. A hastily assembled Marine force under Gen. Alexander Vandegrift landed on the island, which contained mostly construction workers who fled. Underestimating the number and fighting quality of the Marines, the Japanese landed small and then increasingly large forces, but their banzai charges, which proved to be successful against poorly trained troops in China, did not work against the Marines—although several bloody assaults almost succeeded. Over the next months, the American Navy grew increasingly aggressive, more planes and reinforcements arrived, and the American position became impregnable. In November 1942, Vandegrift took the offensive; in February, the Japanese abandoned the island and began their long retreat. Wheelan rightly concludes, “after squandering opportunities to land large numbers of reinforcements in August and September—when Japan enjoyed air and naval superiority—the Japanese attempted to make up for it in October and November. It was too late; by then American air and naval forces had become too formidable.”

Current-day readers, accustomed to an era of perpetual war with no end in sight, will find this expert, nuts-and-bolts history of a famous victory thoroughly satisfying.