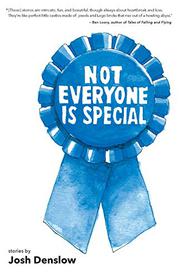 NOT EVERYONE IS SPECIAL

Denslow opens his debut collection by quoting a Tom Waits song, so it’s no surprise the characters within resemble the kinds of affable, sometimes-laughable sad sacks and beautiful losers you find in American fiction from Steinbeck to Bukowski. The opener, “Too Late for a Lot of Things,” resembles Sedaris’ infamous “Santaland Diaries,” if the smallish person at Santa’s Workshop were meaner and tormented by heartland hicks instead. Denslow clearly likes flash fiction, and you find it in ultrashort pieces like “My Particular Tumor,” which recalls the narrator’s obsession with his organs in Palahniuk’s Fight Club, and “Bio,” which chronicles the sad bylines of a writer in a failing marriage. Palahniuk’s underground echoes again in “Punch,” which imagines that citizens are given a pair of federally mandated vouchers to legally pummel someone every now and again. The stories here are deeply grounded in everyday life, mostly among people who aren’t making very much of their days, but Denslow allows a touch of magical realism every now and again. In “Proximity,” our leading man can teleport. “It just hurts like a bitch,” though. Meanwhile in “Dorian Vandercleef," a writer discovers that the subject of his novel is in fact writing the same book—in the first person. Finally, in the title story, a troubled youngster in a strange institute yearns to discover his secret power. Elsewhere, the specter of death hangs over stories in ways both morbid and morbidly funny. The narrator of “Mousetrap” gives his running monologue of suicidal thoughts before an ironic accident saves his life. Another guy attends the funeral of a friend, albeit in hopes of getting laid. When a best friend dies in “Extra Ticket,” the survivor doesn’t know how to process his grief.

A collection of heartfelt, deftly composed stories about the human condition.