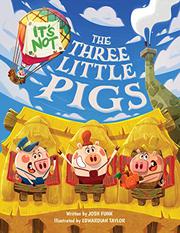 IT'S NOT THE THREE LITTLE PIGS

From the It's Not a Fairy Tale series, volume 4

Although an unseen narrator attempts to tell an accustomed version of “The Three Little Pigs”—here named Alan, Alfred, and Alvin Albert—their younger sister, Alison, wants to get in on the action because she’s a natural storyteller. The narrator grudgingly allows Alison to tag along, but her added bits of flavor and the unexpected personalities of her brothers soon send the story off its traditional tracks and into hilarious hijinks. For example, Alan’s love of building allows him to design a functional house made of plastic drinking straws, Alfred’s stick house is actually constructed by Alan because Alfred’s clearly a star and not stage crew, and Alvin’s shacking up in a pumpkin behind Cinderella’s castle because he’s…not the crispiest piece of bacon on the plate. Alison’s quick thinking leads the brothers to be one step ahead of the wandering wolf. When the narrator hits their limit, a conversation with Alison proves that collaboration can lead to unexpected but wonderful results. The story flows well, accompanied by energetic cartoon art, and the choice to color-code the speech bubbles of each character (and the text of the narrator vs. Alison) ensures readers will be able to follow the snappy dialogue. Those who love to make up their own stories will be inspired, and readers who march to the beats of their own drums will be delighted. (This book was reviewed digitally.)

Will leave readers as happy as a pig in mud.