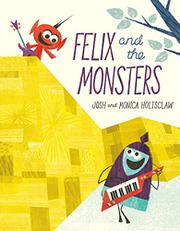 FELIX AND THE MONSTERS

A guard halfheartedly does his job but deep inside has a musical soul.

Felix’s job is to guard a wall and keep his side safe from the monsters on the other side. But what he really likes to do is rock out on his keytar and pretend he is in a band. None of the other guards understand his passion. Instead of wielding a spear or a shield, Felix grabs his keytar and plays “epic solos.” One day, someone joins him. Sounds of a bass guitar float over from the other side of the wall! A small, red, saucer-eared creature named Dot has been “lured…by the beautiful sounds of that portable piano machine.” The temptation to create sweet beats together is too strong—Felix jump to Dot’s side of the wall, and they jam. Felix finds a shocking revelation: The monsters are not monstrous at all. When his fellow guards come crashing in, ready to save him, Felix isn’t sure he wants to go back. In the illustrations, on Felix’s side, everything has sharp, blocklike angles (even the guards). On Dot’s side everything is rounded and smooth. Blue, thimble-shaped Felix himself is a combination of both aesthetics. The conclusion rushes toward happiness and reads a bit slapdash, but it is winsome just the same. (This book was reviewed digitally with 11-by-17-inch double-page spreads viewed at 47% of actual size.)

A gentle reminder of the danger of preconceived notions.