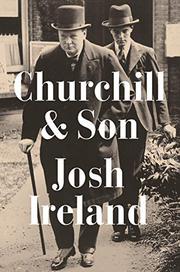 In addition to being the subject of countless biographies, Churchill published hundreds of articles and more than 40 books of his own. In this detailed, engaging narrative, Ireland demonstrates that there is more to be learned about one of the most written-about political figures in history. Exploring the statesman’s relationship with his son, Randolph, the author begins with Churchill’s own famously unhappy childhood, chronicling his parents’ “almost comically detached method of care.” Churchill overcompensated for his father’s neglect by spoiling his son, a poorly behaved boy who became a profligate student and undisciplined adult. For all his gifts and achievements, Randolph led a chaotic life. In one two-week period in 1939, anxious for an heir lest he be killed in the war, he proposed to eight different women, all of whom turned him down. The ninth, Pamela Digby, accepted, and a year later, she became mother to his son, also named Winston. Shortly after, she was forced to rent out their home and take a job to pay down his gambling debts. On the positive side, Randolph was a gifted extempore speaker, effective journalist, and influential counselor to his father—and, later, his biographer. While recounting their relationship, Ireland draws unforgettable sketches of life in the Churchill circle, much like Erik Larson did in The Splendid and the Vile. For example, the family home at Chartwell required nearly 20 servants, as celebrities, politicians, and other “extraordinary people” came and went on a daily basis. Throughout, Ireland is generous with the bijou details: Churchill hated whistling and banned it. When dining alone, he would sometimes have a place set for his cat. His valet would select his clothes, “even pulling on his socks.” After retiring to Pratt’s club after Parliament ended its evening session, he would sometimes “take over the grill and cook the food himself.”

Tragedy as well as triumph in this meticulous, fascinating tale of three generations of Churchills.