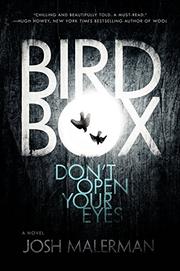 In Malerman's chilling debut, an apocalyptic reality befalls a Michigan river community—and who knows how much of the rest of civilization—in the form of creatures that cause people who merely look at them to go mad and kill themselves.

Having lost her sister to this horrific fate, a young woman, Malorie, finds sanctuary with a group of strangers in a small house with covered windows. Like her co-inhabitants, she learns to perform essential outdoor tasks and even travel distances blindfolded. After discovering she's pregnant, she'll do anything to find a safer place to live. The novel (named after a collection of caged birds that coo whenever anything approaches) cuts back and forth between Malorie's life in the strangers' house, where only an analog phone promises contact with the outside world, and her escape four years later with her unnamed Boy and Girl. In both parts, she lives in fear. At any moment, one or both of the kids could remove their blindfolds and perish. And who's to say whether one of the men, upon returning from an expedition for food or supplies, was exposed to a creature or will usher one into the house? Malerman, leader of the appropriately named rock band The High Strung, keeps us tinglingly on edge with his cool, merciless storytelling. Just when you think he's going to disappoint with a Twilight Zone–like twist, he douses his tale in poetic gloom. One especially unsettling scene involves blasts of lightning, a dog barking wildly at the night, footsteps on creaky attic stairs and two women giving birth, unattended.

An unsettling thriller, this earns comparisons to Hitchcock's The Birds, as well as the finer efforts of Stephen King and cult sci-fi fantasist Jonathan Carroll.