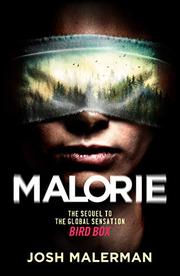 In this sequel to the post-apocalyptic Bird Box (2014), perpetually blindfolded, scared-hopeless mom Malorie must contend with her now-teenage son's perilous desire for freedom.

Nearly 20 years ago, Malorie's hometown in Michigan's Upper Peninsula was visited by creatures that made people who merely glanced at them go mad—and in many cases kill themselves. Ever since, Malorie has been on the run, her eyes tightly covered, somehow surviving any and all obstacles. Since becoming a mother, she has holed up with her son, Tom, and daughter, Olympia, in an abandoned library and one-time summer camp, living on the edge of her fear that one or both of her kids will take off their "fold" and meet a grisly fate. Their lives change when a stranger claiming to be a census taker leaves them with a list of survivors that, to Malorie's astonishment, includes her parents. The stranger also tells them of a working train, "right here in Michigan," that will take them to the U.P. On the "Blind Train," whose windows are painted black, Malorie is unhappy to find herself among casually unblindfolded people who say it's perfectly safe to look at and even live among the creatures. That's music to Tom's ears; chafing under his mother's strict rules, he will do anything to break free of her and her acceptance of "a life in which the only aim is to keep living." Coming from an author as wildly imaginative as Malerman, whose original Bird Box was way more eerie and chilling than the lousy Netflix adaptation with Sandra Bullock, this follow-up is surprisingly humdrum. A one-note character, Malorie becomes as much a drag for the reader as for her son. It's a measure of the book's pinched storytelling that no attempt is made to describe what the creatures look like, what form they take, or even what the heck they want.