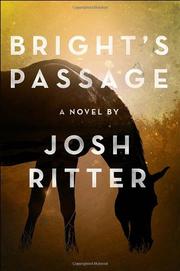 Returning from the traumas of the French battlefield, a young World War I veteran must face up to dark primal conflicts back home in West Virginia, where he is aided and instructed by an angel in the form of a horse.

Folk-rock singer-songwriter Ritter's first novel is a sometimes fatalistic, sometimes fanciful allegory about Henry Bright, a taciturn Appalachian whose wife dies in childbirth, leaving him with a son whom the angel proclaims the future King of Heaven. After burning down his cabin at the behest of the talking horse, he heads into an uncertain future with the baby, making his way through mountains that seem less familiar than they once did. Moving back and forth in time, the novel details Henry's off-kilter childhood, when he was paired off with his future wife, Rachel; his time in France, where one fellow soldier died in a trench in mid-sentence and another saved him from a massacre by falling dead on top of him; and his homecoming, when he is targeted by his wife's evil father and brutal, unbalanced sons. Aiming for the austere existentialism of Cormac McCarthy, the story unfolds with leisurely ease, told in lofty, even tones. Ritter has a knack for details, such as the difference between the German's spacious, cement-fortified trenches and the cramped ones hurriedly dug by the Americans. He's an assured stylist as well: "The fields in between the trenches were wind-whipped ponds of bodies, and even though the bodies were dead they could still pull you down with them; the dead were hungry that way." It will be difficult for some readers to get past the talking horse (not to mention the cranky goat that plays a supporting role), but those who are able to will enjoy an original, freshly observed novel that lingers after the final pages have been turned.

A tender, touching novel about a survivor of both World War I and a nasty family conflict.