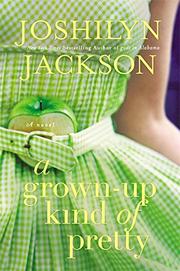 A GROWN-UP KIND OF PRETTY

Jackson (Backseat Saints, 2010, etc.) sticks with her specialty—plucky Southern women who overcome male ill treatment from their past—in this novel about a grandmother, daughter and granddaughter who confront a suddenly uncovered family secret.

Ginny Slocumb, now 45, got pregnant at 15 after what was basically date rape and ended up raising daughter Liza as a single mom. Liza, who has always been headstrong, never named the father who impregnated her at 15. Shortly after giving birth she ran away to live a druggy life on the streets until she returned to Ginny’s home with 2-year-old Mosey and entered drug rehab. Now that Mosey is 15, Liza and Ginny fear she will follow in their sexual steps. To help her avoid the temptations at the public high school, Liza even found the tuition money to send Mosey to private Calvary High until Liza, although drug-free for years, suffered a debilitating stroke at a Calvary function, leaving her semi-paralyzed. When a box with a baby’s jawbone inside is discovered in the Slocumb backyard, the police try to figure out if a murder has been committed, and if so by whom; it seems another infant went missing shortly before Mosey was born. The three Slocumbs react separately. Liza knows the truth, but cannot find the words in her damaged brain to explain what happened. Ginny fears what might have happened, and her efforts to protect Liza and Mosey lead her to re-activate a past relationship. Mosey, already angry at the older Slocumbs and prodded by her two friends, fellow adolescent outsiders, is emboldened to solve the mystery of the bones and her own identity; for if the dead baby belongs to Liza, who does Mosey belong to? Snappy dialogue with a Southern twang, spiritual uplift and undeniably likable characters—“Quirky Cute” at its best.