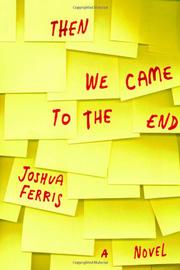 THEN WE CAME TO THE END

This debut novel about life in a Chicago advertising agency succeeds as both a wickedly incisive satire of office groupthink and a surprisingly moving meditation on mortality and the ties that band.

Though Ferris only briefly invokes Catch-22, he transfers that novel’s absurdist logic, insider’s jargon and indelibly quirky characterizations to the business of brainstorming and creating advertising—or at least pretending to stay busy lest one be considered dispensable. After the breezy pacing of the opening chapters presents the cast as indiscriminately eccentric, the plot deepens and relationships become more complicated, with the individual eccentricities of the characters defining their humanity. During a downturn in business, people keep disappearing, either fired or dead. Fired is worse, especially for those who remain, because the fired often refuse to disappear. These coworkers know each other like no outsider can, yet generally have little idea what the lives of their fellow employees are like outside the cubicle. In fact, the novel rarely ventures beyond the cubicle and the conference room, making Ferris’s ability to sustain narrative momentum all the more impressive. The narrator is an ingenious device, a nameless one who uses the third-person “we” to suggest that he (or she) might be any one of the office group. Yet since most or all within the office show that their perceptions are seriously skewed, the reader is never quite sure how much the narrator can be trusted. There’s a crucial interlude, a chapter in which the “we” disappears, and a character who had seemed more like a caricature to those who work for her reveals her flesh-and-blood complexity and ultimately raises the novel to a higher literary level.

The funhouse mirror here reflects the office dynamic at its most petty and profound.