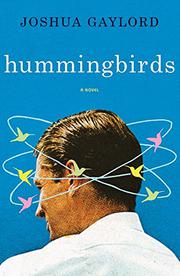 In Gaylord’s winning debut, teenage girls and their male teachers vie for power at a Manhattan prep school.

Leo Binhammer, the only man in the English department at the Carmine-Casey School for Girls, luxuriates in his roles as brooding hero to the students, preening pet of the female faculty. He’s unsettled by the arrival of charismatic new English teacher Ted Hughes. It’s short for Theodore, not Edward like the famous poet, but Leo resents someone “who would use the nickname Ted, knowing…what literary baggage it carries.” Leo’s not just angry because this interloper will be his rival for the girl’s swooning devotion; he also knows that Ted slept with his wife, Sarah Lewis, a few years ago at a conference. Although Leo has reconciled with Sarah, he’s obsessed with the man who made him a cuckold, at first despising Ted, then befriending him. They form a boyish camaraderie of witty insults, but Leo keeps his wife’s identity a secret from Ted and his new comrade a secret from Sarah. As their complicated relationship plays out through the school year, the seniors grapple with the prospect of life after Carmine-Casey. Head girls Dixie Doyle (ironically sporting pigtails and a lollypop) and Liz Warren (brilliant and bespectacled) are extra antsy, each vaguely aware that her special status is a gilded construct that may not survive outside these hallowed halls. The author, himself a teacher at a Manhattan prep school, is a keen observer of this privileged world. He captures Ted’s and Leo’s point of view in such lush language (an auditorium “full of the glowing bodies of ridiculous virgins,” elsewhere described by Ted as “adorable little bundles of outrage”) that readers might overlook his shrewd, subtle presentation of the students.

A very grown-up novel about adolescence and the folly of adults, by an impressive new voice in American fiction.