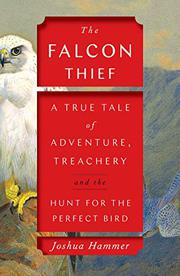 A True Tale of Adventure, Treachery, and the Hunt for the Perfect Bird

The story of an unrepentant birds’-egg thief who found a lucrative market for rare wild falcons on the Arabian Peninsula.

In his latest page-turner, Hammer (The Bad-Ass Librarians of Timbuktu: And Their Race To Save the World’s Most Precious Manuscripts, 2016, etc.) explores two reckless and ultimately disastrous obsessions of people of a certain class and sense of entitlement: egg collecting, which gained currency during the Victorian era, and falconry, pushed to new competitive heights by Arabian princes. The author compellingly chronicles the exploits of Jeffrey Lendrum—who was arrested several times during the last two decades attempting to transport rare, endangered peregrine falcon eggs and others with intent to sell to rich Arabian clients—whom he portrays as a destructive combination of knowledgeable bird-watcher and destroyer of “the fragile, symbiotic relationship between man and the wild.” Early on during his youth in Rhodesia, Lendrum’s father passed along his passion of observing wildlife. As a young boy, he was enlisted to raid the nests of wild birds so that the eggshells, emptied of their yokes and dried, could be added to his father’s collection. Despite the risk and illegality of the enterprise, Lendrum learned to hike and scale great heights—in Wales, Canada, and even Patagonia—to attain peregrine eggs, which many members of the royalty in Dubai covet for their lucrative racing games. In this well-written, engaging detective story that underscores the continuing need for conservation of rare bird species, Hammer delineates the trials of Andy McWilliam, the retired policeman who grew admirably to serve in his capacity as officer for the National Wildlife Crime Unit, which helped prosecute Lendrum and others. Throughout, the author beautifully renders this tale “of human obsession and nature’s fragility, of man’s perpetual insistence on imposing his will upon the wildness of our world, and of the tiny handful of investigators, most unrecognized, working to safeguard the environment’s bounty and wonder.”