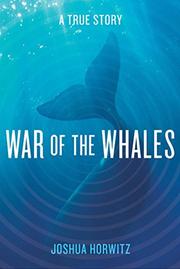 WAR OF THE WHALES

Living Planet Books co-founder Horwitz chronicles an ongoing collision of epic proportions between the U.S. Navy, intent on protecting its submarine warfare program, and environmental activists, who fight to save whales from extinction.

The author begins in March 2000, when, over several days, “the largest multispecies whale stranding ever recorded” occurred across 150 miles of beach in the Bahamas. Rescue efforts led by Ken Balcomb, a researcher who was conducting a census of whales in the area, were mostly unsuccessful, but he was able to preserve their bodies for later forensic examination. Having served as a naval sonar expert, Balcomb surmised that training exercises involving a top-secret “Sound Surveillance System,” developed during the Cold War to monitor Soviet nuclear submarines, were likely responsible. The use of high-decibel, low-frequency sonar signals by the Navy would have overwhelmed the whales' biosonar system and caused physiological damage as well. This was not the first such incident of whale strandings in the vicinity of naval exercises—nor, unfortunately, the last. The author reports on the battle led by Balcomb and Joel Reynolds—a senior lawyer for the Natural Resources Defense Council—to force the release of the forensic evidence and the attempts by the Navy’s top brass to stonewall any serious investigation that could lead to curtailment of their activities. The battle led to a court ruling against the Navy for overriding environmental law. The Bush administration overturned the court decision by executive order on grounds of national security, and the NRDC countered legally, asking for a ruling on the administration's action. The case went to the Supreme Court, which ruled that the administration was within its rights, but it opened the door for the requirement of “comprehensive Environmental Impact Statements” in advance of any future naval maneuvers.

Based on years of interviews and research, Horwitz delivers a powerful, engrossing narrative that raises serious questions about the unchecked use of secrecy by the military to advance its institutional power.