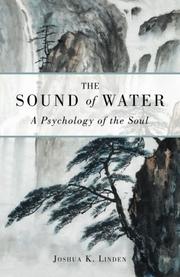 THE SOUND OF WATER

A Psychology of the Soul

Linden, in his debut nonfiction work, shares insights gleaned from his years of reflection on the nature of the soul.

The book begins with a fable that serves as a metaphor for awakening. In it, a human named Turtle Wolf, using patience and stealth, moves through the jungle to the “‘living water’” that comes from freeing oneself from the ego (“the ultimate tyrant”). Numerous short chapters follow, containing brief essays on the nature of ego, “Mind,” “Soul,” and “the Source.” Among other things, the book touches on reality and unreality, and says that unrealities arise only when one isn’t truly present in the moment. However, it cites the ego as “a necessary and important unreality,” which can lead to awakening; when one ceases to identify with the ego-based view, it says, the Mind can finally merge with the Source. Linden notes that the ego seeks problems, and that the solutions to those problems only reinforce the ego; he also says that thinking and analysis are ego-based processes that are “fundamentally forms of competition.” As a result, he says, ego-directed creations are likely to be mediocre, while Soul-directed creations are great works of art. He goes on to say that the disintegration of the ego is a necessary, significant passage in human development, often called “the Dark Night of the Soul”: “The Soul is at peace when the Mind and the Source are one in and of the present.” In this book, Linden effectively shows that even unrealities have a purpose, as they serve as tools for abandoning illusion. His primary sentiment, however, is that people should be present without judgment and without resistance—one that’s also espoused by Eckhart Tolle (author of the 1997 spiritual self-help guide The Power of Now) and fellow author Esther Hicks. Ultimately, his book gets across the message that reality is the experience of “living life awake.” Although Linden’s text sometimes echoes the teachings of the aforementioned Tolle, its message organically arises from the author’s personal experience and process—a clear, simple approach to life that uses straightforward language throughout. However, it’s not a quick, easy read; instead, its weighty statements invite readers to pause and ponder, and ideally, to be present.

A collection of well-written, perceptive, and quietly powerful essays, meant to be savored.