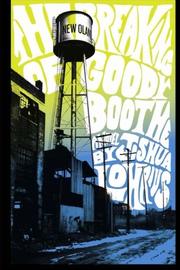 THE BREAKING OF GOODY BOOTHE

Lohrius’ debut chronicles the trials and tribulations of a young athletic prodigy struggling to find his place in the world.

Goody Boothe is an insecure 15-year-old athlete dreaming of a better life. His mother works two jobs to get him into private high school and struggles to continually point him in the right direction. The kid’s life eventually hits some really high notes: a beautiful girlfriend, plenty of sex, adoring rich friends and endless beer parties. All of this is Goody’s to lose—and he does, thanks to his older cousin Van Maroon. Van, a wise-cracking, low-rent criminal who sells dope to teens, has no moral compass, no sense of responsibility and no loyalty to anyone but himself. After slamming into Goody with his car, Van frames him for two jewelry thefts to protect his own hide from a violent gang. Despite his braggadocio, Van seems subconsciously bent on self destruction. The novel’s first-person narrative works well as it alternates between Van and Goody, but it often suffers from an overdose of hyperbole. Equally distracting are the incessant segues into obscure TV shows and movies, which needlessly interrupt the narrative flow. The same holds true for the mindless 60’s “head shop” prose spouted in Dr. Galaxy Valentine’s, The Roadmap: Finding Peace, Happiness and the Kingdom of Laughter, a book which, the author suggests, exerts a powerful influence over Goody’s world view. Lohrius succeeds in developing memorable characters that are reasonably well drawn, albeit predictably cliched. One character cast against type is Skeeter, Goody’s rich girlfriend, a social chameleon who flaunts convention. The book ends with a violent act of retribution that seems incongruous with both the story and the central character, making for a climax that destroys what Goody and his poor mother have worked so hard to attain.