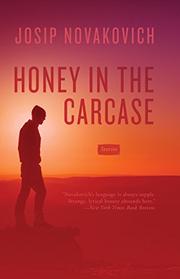 HONEY IN THE CARCASE

In this tense collection of short stories, Novakovich (Heritage of Smoke, 2017, etc.) explores the nature of conflict—from people ensnared in civil wars to the uneasy bonds between humans and animals.

Surprises abound in Novakovich’s latest collection, which covers the lives of people in Eastern Europe grappling with authoritarianism, internal conflicts, and the pressures within their own communities. These are familiar themes, but Novakovich keeps things unpredictable from the outset: The title story, about a beekeeper living in the midst of a war zone, ends on a frenzied, surreal note that hints at the author's ability to both channel realism and, when the occasion demands, undermine it entirely. “Fritz: A Fable” is set at a time of war between Serbia and Croatia and centers around a couple, each with ties to one side. They own a dog and cat who are in constant conflict, which both echoes and eventually transcends the larger chaos around them. Much like the title story, “Wool” also involves animals and ends unexpectedly: In this case, a girl’s father procures a lamb for her, and she bonds with it—but soon, the father’s cynicism and abuse take things in a bleak direction. Even with that in mind, the ending comes off as genuinely shocking. This collection isn’t simply an immersion in human horrors, though: “Charity Deductions,” about a well-meaning, wealthy American whose good intentions backfire memorably, takes on a more overtly satirical tone. Novakovich expertly probes the minds of the virtuous, the menacing, and the self-deluded in equal measure; the ending of “A Variation on a Theme of Boccaccio,” in which the narrator realizes he’s hardly the hero of his own story, is particularly harrowing.

These stories manage the impressive feat of blending gritty realism with more surreal strands, making for a gripping read.