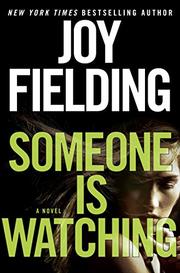 A detective searches for her rapist in Fielding’s latest thriller.

Heiress to her father’s Wall Street fortune, Bailey Carpenter lives a life of privilege in a luxury Miami high-rise and works as an investigator for a law firm. However, Bailey and her actor-brother Heath are being sued by their five half siblings, who were left out of the will. Bailey is still traumatized by her father’s fatal heart attack and by her mother’s long ordeal and death from cancer. Her romantic life is also complex—she’s in love with her married boss. Hiding in some bushes after midnight, staking out a deadbeat dad, Bailey is viciously raped by a masked assailant. She can recall only the feel of his gloves, a fleeting glance at his black Nike sneakers and his voice, asking her to “tell me you love me.” Another ordeal begins as Bailey, on leave from work, suffers panic attacks, severe weight loss and recurring dreams of her attacker and circling sharks. Her half sister Claire, a nurse, comes to the rescue, accompanied by teen daughter Jade, who has done a stint in juvie and expertly picks Bailey’s locks. Despite the lawsuit, Claire’s care for Bailey is devoid of any greedy ulterior motives. She recommends a therapist and tries to discourage Bailey from another self-destructive habit she has picked up: observing a man in a neighboring high-rise who has nightly sexual assignations fully visible through his open window. As his acts become violent, Bailey can't interest law enforcement in focusing on the window exhibitionist since she's the only one to ever observe him doing anything suspicious and her credibility is suspect due to mental instability. The conclusion to all this involves improbable coincidences, a giant MacGuffin and surprising lapses of intuition on the part of supposedly seasoned gumshoe Bailey; her hypersensitivity is very selectively triggered, usually by red herrings.

Still, the mystery is not the point in Fielding’s work: A page-turning ride with a likable protagonist is, and here, she succeeds admirably.