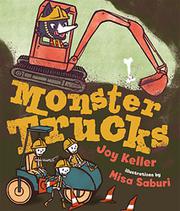 Just the book for the perceptive kids who ask where all the Halloween monsters go the rest of the year.

They drive monster trucks, of course, each one perfectly suited to the job and truck at hand. The witch trades in her broom for a street sweeper. The werewolf operates a digger, and the vampire hangs upside down from the cherry picker to fix high buildings. And the yeti? He’s a snowplow operator. “A speeding ambulance draws near. / A mummy’s working in the rear. / He’ll patch each monster bump and scrape / with lots of bandages and tape.” Other creatures include skeletons, a swamp monster (aside from the witch, the only other character identified as female), the Minotaur, and an ogre. The ending sees the sleepy monsters heading off to bed as the full moon rises in the sky. And Keller spells it out for anxious kids: the monsters won’t be found under beds or in closets: “They’re much too tired / to crawl and creep. // They’re snoring soundly, / fast asleep.” Saburi’s digital illustrations portray enthusiastic monsters enjoying their work, some maybe a little too much. While still toothy or large or gross, none are too scary for readers to handle, especially when posed against the vehicles so many kids are fascinated with.

A good book to try when monster fears strike at night.