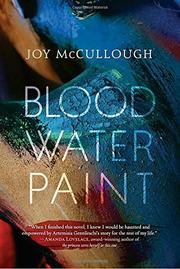 Baroque artist and feminist icon Artemisia Gentileschi is given voice in a debut verse novel.

Only 17, Artemisia is already a more gifted painter than her feckless father. But in 17th-century Rome, the motherless girl is only grudgingly permitted to grind pigment, prepare canvas, and complete commissions under his signature. So when the charming Agostino Tassi becomes her tutor, Artemisia is entranced by the only man to take her work seriously…until he resorts to rape. At first broken in body and spirit, she draws from memories of her mother’s stories of the biblical heroines Susanna and Judith the strength to endure and fight back the only way she can. Artemisia tells her story in raw and jagged blank verse, sensory, despairing, and defiant, interspersed with the restrained prose of her mother’s subversive tales. Both simmer with impotent rage at the injustices of patriarchal oppression, which in the stories boils over into graphic sexual assault and bloody vengeance. While the poems (wisely) avoid explicitly depicting either Artemisia’s rape or subsequent judicial torture, the searing aftermath, physical and mental, is agonizingly portrayed. Yet Artemisia’s ferocious passion to express herself in paint still burns most fiercely. Unfortunately, those who lack familiarity with the historical facts or context may emerge from this fire scorched but not enlightened. McCullough’s Rome is a white one. A brief note in the backmatter offers sexual-violence resources.

Nonetheless, an incandescent retelling both timeless and, alas, all too timely.