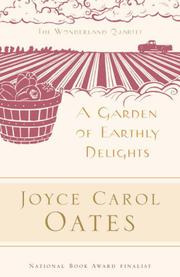 A GARDEN OF EARTHLY DELIGHTS

This extensive revision of Oates’s second novel, published in 1967 and nominated for a National Book Award, breathes new life into a precociously brilliant book that probably deserves a place among the classics of American naturalist fiction.

The triptych focuses on the life of its “white trash” protagonist Clara Walpole, born the daughter of Kentucky migrant laborers. In the opening section, “Carleton,” Clara’s overworked, embittered young father experiences his growing family’s immersion in squalor, the loss of his eternally pregnant wife Pearl, and an emotional intimacy with his “favorite” child that sends him in search of the runaway Clara, with catastrophic consequences. “Lowry” is the phlegmatic vagrant who takes Clara to upstate New York (and Oates’s subsequently familiar fictional Eden Valley), fathers her son Steven (a.k.a. Swan), and abandons her to a relationship with married agricultural entrepreneur Curt Revere, who becomes her lover and her keeper. Swan tells Clara and his own story as the kept woman rises to respectability, the violence that seethed through Carleton reasserts itself in even his timid, bookish grandson, and Clara sinks into premature stasis and senility. As her thoughtful afterword explains, Oates has, in addition to reshaping particular incidents and emphases, enhanced this already potent story by replacing its original omniscient narrative voice with accents more closely aligned with her characters’ thoughts and speech. The resulting characterizations are unusually full and rich, and the sense of an implacable brute nemesis working its way through the Walpole generations is unerringly precise. Oates excels when depicting Clara’s sensual, earthy appetitive energies, and her portrayal of the hapless Swan’s self-destructive momentum, his feeling of belonging nowhere and to no one, is almost beyond praise. The gritty, insistent prose that has recently hardened too often into mannerism, here vibrates with revelatory clarity.

A wrenching delineation of the culture of poverty—and how it shapes and circumscribes character.