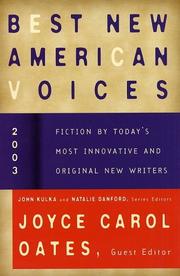 Ultraprolific Oates (I’ll Take You There, p. 985) perhaps doesn’t have enough to do; this time out, she leans toward the experimental with 15 tales selected from writing programs’ brightest and best.

Some of the edges are rough, but the breadth of approach is what’s most encouraging here. The protagonist of Esi Edugyan’s “The Woman Who Tasted of Rose Oil” is a ghost; Eastern philosophy and medicine trigger healing in Westerners in Susan Austin’s “At Celilo”; the reinvention of war stories in the wake of computer games and the Gulf War continues in Otis Haschmeyer’s choppy but nonetheless pleasing “The Storekeeper”; the best first sentence prize goes to Dylan Tai Nguyen for “At first glance she mistook his handwriting for barbed wire,” in “Peace,” a tale about a Communist but peaceful Vietnam. Meanwhile, Barry Matthews’s “Everything Must Go” seems pulled straight from the headlines when improperly disposed-of corpses are discovered at an undertaker’s a few hundred yards from the protagonist’s home; violence intrudes upon, and shapes, theories on love and family in Jenn McKee’s “Under the Influence”; Hal Horton’s “The Year Draws in the Day” is a survey of love and death via the gay culture; Brad Vice’s “Chickensnake” is a version of an oft-told tale in which a snake crawls up a 20-foot post to feed on birds, only to be shot down by the protagonist’s father (he was “only a snake doing what snakes do,” the boy laments); the most conventional story is probably Cheryl Strayed’s “Good,” in which two people helping to care for loved ones at a home for the infirm turn guiltily to one another for needed affection. These tales may be a better mirror of Oates’s own huge body of work than a survey of the best of anything. As Oates herself says, “The emerging writers . . . are a testament to the ongoing vitality, imagination, and richness of that culture.”

Varied and risky—with the fingerprint of Oates’s fetish for the macabre.