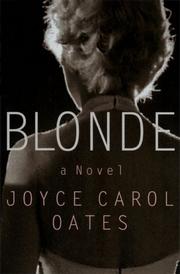 In the perverse manner all too typical of her singular career, Oates follows up one of her best novels'last year’s plaintive Broke Heart Blues'with one of the worst she (or any other contemporary “serious” author, for that matter) has ever committed to paper. It’s a bloated, humorless fictional speculation on the life and career of Marilyn Monroe that mixes together canned US and film history, fanzine gossip, and heavy-breathing fantasy. The story begins in early-1930s Hollywood, where young Norma Jeane [sic] Mortensen endures the manic-depressive attentions of her self-dramatizing mother Gladys, who’ll spend most of her subsequent life in mental hospitals. The novel then becomes a rapid-fire tour of “MM’s” troubled adolescence (as a foster child and precocious sexpot), early marriage (to an ardent young husband she breathlessly pet-names “Daddy”), first success as a model (often nude), and very gradual conquest of Hollywood, and hopeful, doomed relationships with eminent figures coyly identified as the Ex-Athlete, the Playwright, and the President. Pretentious epigraphs from Freud, Stanislavsky, and Emily Dickinson, among others, sprinkled throughout the text, cannot disguise this really dreadful book’s eccentric blend of sleaze and turgidity. Dime-store psychology and portentous symbolism abound: Norma Jeane’s childhood dreams of the “Dark prince” Who Will Take Her Away From All This are emphatically linked to the father she never knew, and with Death, who comes for her when she’s only 36. And the Oates’s leaden prose (think Jackie Collins crossed with Thorstein Veblen) is all too frequently susceptible to such horrors as the following (whose author should burn forever in pulp-fiction hell for perpetrating it): “Gamely the Blond Actress began to stroke the President’s penis, as one might stroke a charming but unruly pet while its owner looked on proudly.” Whatever Monroe’s sins and limitations were, they didn’t merit this contemptible insult to her memory. Oates should be ashamed of herself.