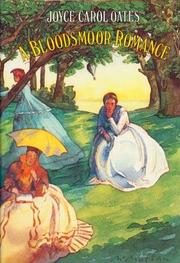 Oates did her morbid, verbose thing with The Great American Family Saga in Bellefleur (1980). Now, with somewhat more control and a slightly lighter touch, she offers her parody/version of a 19th-century Popular Romance: ornately, breathily narrated by "a maiden lady of advanced years," this is the story of five Pennsylvania sisters, 1879-1899—but, predictably, the period conventions here are laced with spiritualism, perversion, feminism, and other Oatesian preoccupations. The tale begins, then, on the 1879 afternoon when Deirdre Zinn—adopted (and youngest) daughter of the Zinns of Bloodsmoor Valley—is abducted by a black-clad figure in a black balloon. And, while repeatedly bemoaning this scandale, the narrator slowly fills in the more conventional family portrait: the devoted Zinn parents, heiress Prudence and poor teacher/inventor John Quincy; level-headed daughter Constance Philippa, engaged to a Baron; sweet, pretty Octavia (the narrator's favorite); saucy Malvinia; tomboy/intellectual Samantha, who helps her father in his laboratory; plus—Great-Aunt Edwina, famed "authoress." Yet, as the book progresses, virtually everyone will turn out to be as unconventional as Deirdre. The fabled "passionate courtship" of the Zinn parents is revealed to have been the result of a misunderstanding. Constance Philippa disappears on her wedding night. . . to reappear years later as a transsexual. Octavia's supposedly Perfect Marriage leads to child-killings, fatal sado-masochism, and such. . . before she finds happiness by remarrying beneath her station. Malvinia runs off with an actor, becomes (to the narrator's horror) a stage-star, is forever haunted by "The Beast" of sensuality. (Among her bedmates: Mark Twain.) Samantha elopes too, with Papa's assistant. ("Ungrateful children! Shameless sinners!") And Deirdre, whose balloon-abduction was just part of her deep involvement with the Spirit World, becomes Madame Blavatsky's protege—a super-medium who scorns Marriage and is nearly wiped out when an exorcism goes awry. Through it all, of course, right up to an 1899 reunion (when the ho-hum secret of Deirdre's birth is revealed), the narrator upholds the Traditional Feminine Virtues while the characters usually find happiness by abandoning them: the anti-Victorian ironies are deafeningly unsubtle. And—at 640 pp.—the joke goes on far, far too long. But the mock-longwinded prose here is, as it happens, a good deal more readable than the earnest, pretentiously longwinded prose of recent Oates fiction; and readers with a taste for whimsical historical-novel sendups will find this mildly, thickly entertaining—certainly less lumbering than Erica Jong's Fanny, if far less pointed or vivid than Ray Russell's Pamela novels.