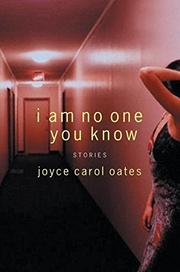 I AM NO ONE YOU KNOW

More of the same, from the most frustratingly uneven writer in the business.

In other words, the usual disjointed gathering of carefully composed and inexplicably slipshod work: 19 stories, of varying length and intensity, most of which present overfamiliar Oates character types: people who experience violence or menace or are haunted and traumatized by memories of it. Examples include: “The Girl with the Blackened Eye,” recalling how she survived abduction and rape by a serial killer; a 60-ish “forensic specialist” fascinated by the body he partially “reconstructs” from a murder victim’s battered remains (“The Skull: A Love Story”); and the unhappily married woman teacher who unwisely seduces an unstable teenaged misfit boy (“Mrs. Halifax and Rickie Swann: A Ballad”). Many involve families variously misshapen: a suburban husband who deals recklessly with the constant importunings of his underachieving, possibly suicidal brother-in-law (“Aiding and Abetting”); a woman who reluctantly accompanies her long “lost” brother to the house where their father had murdered their mother (“The Deaths: An Elegy”); and the bright, despairing adolescent boy who stoically “protects” his promiscuous, drug-addled mother (“Me & Wolfie, 1979”). There’s nothing new here—or even in such nominally unfamiliar tales as that of “two NYU girl-poets” who encounter Marilyn Monroe in a bookstore (“Three Girls”), or an account of the 9/11 catastrophe as experienced by a woman seemingly blessed with a perfect life (“The Mutants”). Three stories strike deeper: “Curly Red,” the wrenching monologue of “a daughter denounced by her family for ratting to police on two brothers” (who had committed murder); a middle-aged woman’s complex memory of the predatory neighbor who had almost raped her, years earlier (“Upholstery”); and the splendidly ironic “Happiness,” about a presumable parricide and its contrasting effects on the lives of two sisters.