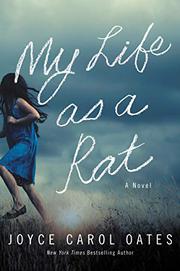 MY LIFE AS A RAT

A young girl is exiled from her family after she reveals her brothers’ involvement in a brutal crime.

Oates (Mysteries of Winterthurn, 2018, etc.) has often found her fictional subject matter in the lives of girls and young women struggling with the aftermath of trauma. This time her main character is Violet Rue Kerrigan, youngest of seven siblings in a close-knit, working-class Irish Catholic family living on Oates’ upstate New York turf in the early 1990s. It’s a family imbued with sexism and racism, led by an angry father and a mother who teaches her three daughters compliance as a way to survive such men; as Violet says: “If you do not antagonize them, if you behave exactly as they wish you to behave, they will not be cruel to you.” Violet learns the terrible consequences of noncompliance when she’s 12. Her two oldest brothers have already evaded punishment for a gang rape when, one night, out drinking, they encounter a lone black teenager and beat him savagely. Violet is the only one who knows their secret. After the boy dies, she panics and tells her school principal and nurse what she knows. She’s put in protective custody—one brother has injured her as a threat—but is utterly shocked to learn that her family doesn’t want her back. Oates follows Violet for more than a decade as, marked by the traumas of her exile and her upbringing, she is targeted by a series of male predators. Her mental stability sometimes deteriorates into the fever-dream state Oates can evoke so well; the author shifts point of view among first, second, and third person as if Violet can’t even get a grip on her own identity. Violet’s fraught relationship with her family moves to an explosive climax, but there are signs of redemption as well, for her at least.

Oates explores the long echoes of violence born of sexism and racism in one young woman’s life in this deft psychological thriller.