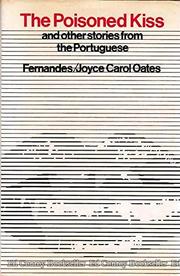 POISONED KISS AND OTHER STORIES FROM THE PORTUGUESE

Miss Oates announces in her Afterword that these stories "came out of nowhere" between writing bouts with Wonderland (1970). There was no "Fernandes." (Or was there? "Is the brain a kind of organic mechanism. . . through which a larger trans-human or trans-species consciousness is somehow filtered?") Miss Oates' metaphysical/paraphysical speculations aside, the stories seem best categorized by the author's own phrase, "cerebral/Gothic." One might also route these tales of horror and dread to Wonderland's persistent images of "a universe of broken people." In one story the wooden Baby in the arms of a wooden Madonna is broken in half; in another a man is gradually drawn to the quartet of drunks in the park and their "absolute namelessness, the freedom of formlessness." Fragmentation, impotence, the hell of desire never satisfied except by violence—and so little Fernandeses from greater Oates grow. There are several exercises featuring double identities and superimposed images: man and man, writer and critic, dreamed and dreamer, victim and murderer. Self-exploration or self-indulgence? An open and perhaps unnecessary question. These sometimes oblique, often sharp barbs of terror are just that and no more.