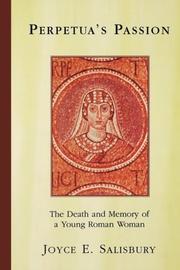 The Death and Memory of a Young Roman Woman

An insightful, moving account of the death of an early-third- century Christian martyr, based on her own diary. Vibia Perpetua was the daughter of an old respected Roman family of Carthage and, although raised in accordance with the pagan religious traditions of Rome, converted to Christianity, one of many faiths competing for devotees in the Roman Empire. Just 22 years old, she was arrested with several other converts to Christianity and, because she refused to acknowledge the divinity of the emperor Septimus Severus (and even though she was the mother of an infant), was sentenced to be killed by beasts in the Carthaginian arena. Salisbury (Medieval History and Humanities/Univ. of Wisconsin, Green Bay) uses the text of Perpetua's diary, written in prison, to explore this extraordinary young woman's decision to renounce her prosperous life and embrace a horrible death, and to depict in vivid and fascinating detail the world of pagan Rome and the insular community of the early Church, with its emphasis on prophecy and speaking in tongues. Salisbury notes the contrast between the Roman religion, with its thousands of household gods, and monotheistic/trinitarian Christianity with its claim to be the only universally true religion. Also, the patriarchy of traditional Roman society, which restricted women to the roles of wife and mother, stood in stark contrast with the egalitarian promise of Christianity, which taught that all persons were equal before God and often gave women a leading role. Using Perpetua's text, Salisbury shows that, despite the dangers, the young woman turned her back on her affectionate family and infant son to become a Christian because of her profound conviction that she was experiencing the presence of God. A uniquely absorbing and poignant study of the vanished world of the early martyrs. (11 illustrations, not seen)