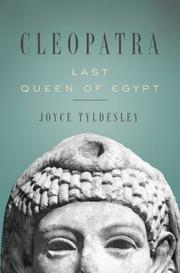 A new biography of the Macedonian ruler attempts to debunk many myths surrounding her legacy.

Egyptologist Tyldesley (Egypt: How a Lost Civilization Was Rediscovered, 2006, etc.) digs deeply into Cleopatra’s life, piecing together a unique portrait of her successes and failures. In chronological fashion, the author covers the major historical issues surrounding Cleopatra, but she wisely avoids lingering too long on well-traveled ground. Tyldesley examines many of the burning questions that continue to puzzle historians—Was she black? Did she marry her brother? Was she beautiful or ugly?—and that have helped create such a beguiling picture of the queen. Many biographers focus too much on Cleopatra’s reputation as a temptress, but Tyldesley gamely analyzes her politically astute nature at work against the backdrop of the bloody, brutal times in which she operated. However, the author doesn’t shy away from discussing the many apocryphal tales that swirl around the Ptolemaic ruler: the queen smuggling herself in a roll of linen sheets (or, in more common myth, a carpet) in an attempt to reach Caesar; the presentation of Pompey’s severed and pickled head to Caesar as a gift, etc. The various stories about Cleopatra’s relationship with Antony are thoroughly dissected, and Tyldesley supplements these with a neat examination of Shakespeare’s Antony and Cleopatra. The most absorbing passages concern her relationship with Antony and her subsequent demise, which are interspersed with (sometimes conflicting) quotations from fellow historians. Tyldesley also includes a welcome guide to the individual characters that Cleopatra encountered during the Ptolemaic period.

A satisfying blend of historical fact and strong, informed opinion about one of history’s most captivating figures.