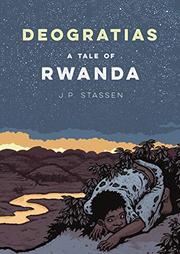 A Tale of Rwanda

The impact of the Rwandan genocide through the eyes of a Hutu teenager.

Deogratias is beset with flashbacks of the war and his role in inflicting carnage. We first meet him after the bloodshed, in a bar where he meets an old friend, a white French sergeant. As the story jumps back in time, readers learn about young Deogratias’ heavy drinking, which works to keep the memories of his horrific behavior at bay and enables him to convince himself that he isn’t a dog—inhumane. Yet, although every drop is meant to prevent his metaphorical, and even sometimes physical, transformation into a dog, we witness how Deogratias was compelled to join the Hutu militia and murder two Tutsi friends. Running throughout is the muted narrative of the pastoral work of the white European men of the church and the ways in which they help and complicate Rwandan lives. The lucid, sometimes-painful imagery—depicted in intense colors, with highly expressive faces—accompanying this story illustrates the ways in which the hierarchies besetting race and ethnicity, imposed by the sociopolitical climate, all come to bear on the decisions made by the characters. Readers can’t help but simultaneously empathize with and loathe Deogratias’ decisions as his PTSD shuttles one back and forth between his reveries of past and present.

A graphic novel of regret riddled with inescapable grief, capturing attention from the outset, with a stinging and near-to-cathartic ending.