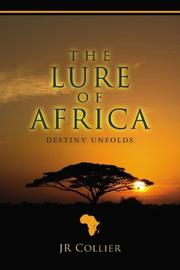 THE LURE OF AFRICA

A Canadian divorcee packs up her family and moves to Africa.

This autobiographical tale of life in Africa begins when the author (formerly known as J.R. Donnell) applies for a teaching job in one of the most stable African countries, Kenya, and arrives there in January 1972 with her four children: Jaden, 14, Scott, 12, Rick, 11 and her youngest Tina, eight. Bureaucratic problems begin at the Nairobi airport and continue when Donnell’s promised teaching job does not materialize. Her Kenyan friend from Canada, who helped her apply for the job, provides her with a house on his brother’s farm while she searches for work. The author’s landlord makes sexual advances, Jaden contracts malaria and their pets are killed off as the family struggles to adapt to the beautiful but harshly unfamiliar world in which they now live. Engrossing, though often repetitive, descriptions of their difficult and dangerous everyday lives keep the reader engaged as the Donnells fall in and out of trouble. The naÃ¯ve author must fight off unwelcome sexual advances from those she thought were her friends, and the only person she trusts is Mark Kibira, a Kenyan with whom she’s having an affair. Mark is from a wealthy family and helps Jerry buy native products to export to her uncle in Canada, who in turn promises to sell them in his store. A series of rented houses provide a home for the family, but the children are only intermittently in school and often left to their own devices. While the author and Mark travel the country looking for items to export, Jaden narrowly escapes an attempted rape. Donnell accepts a marriage proposal from the often-unreliable Mark, and as her first year in Kenya draws to an end, the marriage is in trouble, her uncle is refusing to handle her first shipment of goods and Jaden, who has returned to Canada, is pregnant. Despite redundancies, the amusing and terrifying anecdotes in the book make for an absorbing story.

More a harrowing memoir than a travelogue on the beauty of Africa.