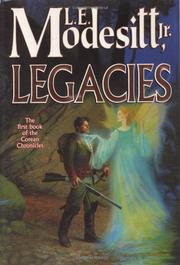 The First Book of the Corean Chronicles

Following his fine Archform: Beauty (p. 625), Modesitt kicks off a new series that, like the Recluce yarns, curiously but plausibly blends fantasy and SF. The Herders of the Iron Valleys in the north of the continent Corus tend their nightsheep on huge, rocky estates. Inedible nightsheep are the source of nightsilk, a miraculous fiber that's light, soft, and tough enough to turn a bullet. Herders like young Alucius also have, secretly, Talent (psychic abilities that help them survive against the deadly local fauna)—secret because, long ago, a great war involving Talent destroyed civilization. Today the Iron Valleys are threatened by neighboring Madrien, a matriarchy whose immortal Matrial enslaves rivals and captives through Talent-powered collars. So, leaving behind his betrothed, Wendra, and grandfather Royalt to tend the estate (his father died in battle), Alucius joins the militia and rides off to fight the Matrites. Despite his Talent and skills acquired from Royalt, Alucius and his fellow troopers are overwhelmed by superior numbers and an ancient weapon that hurls lethal volleys of glass spears. Wounded and captured, a collar clamped about his neck, Alucius must fight for the Matrial as a trooper against the encroaching Lanacronans. Again he survives and gains promotion. But then one of the soarers, seemingly intelligent flyers of feminine aspect, advises Alucius that he must soon find a way to free himself and defeat the Matrial, a threat to all sentient creatures.

Solidly engrossing, if too dependent on luck and coincidence, with a robust and consistent backdrop: a satisfyingly self-contained inaugural volume that skillfully sets up the sequels.