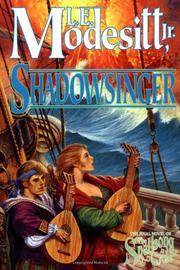 Fifth and final volume of the Spellsong Cycle (The Shadow Sorceress, 2001, etc.)—a series based on wizardry emerging from music, with the Continent of Leidwahr being ruled, first by top singing-sorceress Anna, Protector of Defalk, then by her protégée Secca. Previously, Earth-born Anna died and was replaced by Secca, who now must face the ruler, the none-too-bright Robero. Robero sends her forth to test her youthful mastery of Clearsong and Darksong against rebel powers, and in doing so face insurrectionist Lord Mynntar, whose Sea-Priests use strange drumming music to whip up a murderous tidal wave that wipes out coastal areas. Secca falls for former enemy sorcerer, the handsome Alcaren, and together they sing/whip a spell that brings volcanic lava and flames to bear on the islands of the evil Sturrinese. The present volume's 75 characters are listed, since few readers will remember their often undramatized ties, not to mention those departed but referred to from earlier installments. Although Secca successfully defends Defalk, Lord Robero arises as her signal antagonist and must be dispatched if Secca is to be Lady of Defalk, marry Alcaren, bear his child, and ensure the longevity of the state.

Fans will praise Modesitt for ringing down the curtain on Leidwahr.